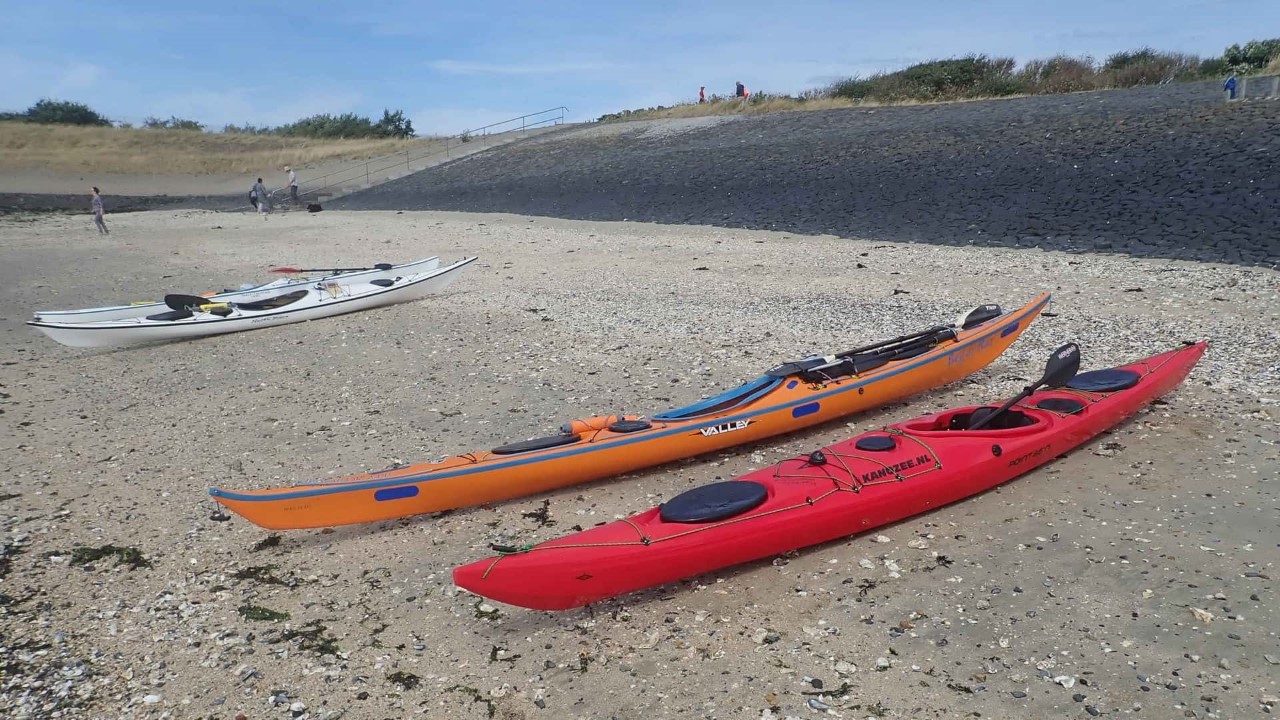 Kanozee in Zierikzee, The Netherlands, is dealer of Point 65°N kayaks. They handed over the Whisky 16 Rocker for a rigorous test on national park Oosterschelde, in the south-west of the Netherlands. Zierikzee is situated at this amazing estuary. During the test a stiff south wind with subsequent waves provided superb conditions to explore the characteristics of the Whisky. 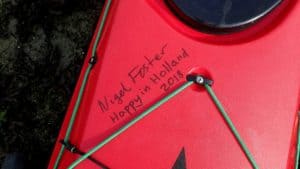 About the Whisky
The 16 feet long boat is designed by kayak legend Nigel Foster and like all Point 65 models made from three layered polyethylene, resulting in a very rigid and lightweight kayak. According to the manufacturer it’s a manoeuvrable boat, suitable for beginners but also appropriate for advanced paddlers. The latter is important, because the beginners stage is usually over soon! My own skills are best described as “advanced novice”; I already have spent quite some hours in several types of kayaks, but still need to learn and improve my skills a lot. But first, let’s see how this relatively short kayak behaves o n open water. 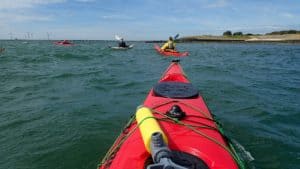 The water in the harbour was calm enough for a picture.

Bit choppy today
We were with a group of nine kayakers and were treated on a challenging playing field: a strong southerly wind, 4 Beaufort and the waves were such that without a spray skirt the boat would have filled up with water in no time.

When leaving the Schelphoek harbour our initial direction was perpendicular on the waves, so we were just breaking through them and paddled along relaxed. Then the course became more westbound, the waves came in at an angle which in combination with the wind gave the boats a tendency to start windcocking. Still, recovery was easy: now and then a bit of a sweep stroke and the bow was pointing the right way again. Later on I also used the skeg in several positions, depending on direction and force of the side wind. The skeg works perfectly, but without it it’s still great paddling. Operating the skeg may take some getting used to. Instead of the conventional sliding system a rotating knob is installed. I kept forgetting which way to turn to move the skeg outward. There are markings, but these are only visible when you’re beside your boat. Anyway, one sweep stroke and you feel immediately in what position the skeg is. A minor inconvenience. 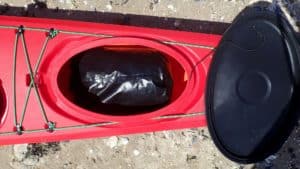 Luggage space
After six kilometres we took a break on a small beach. After opening the rubber hatches the watertight compartments lived up to their names. For kilometres waves had crashed over the deck, but not a single drop was visible on the luggage!

With a length of 488 cm the Whisky can be considered a relatively short kayak, but the hatches provide access to a considerable volume. When looking into my own packing list I can easily stack everything in this kayak for an extended holiday, including all gear for wild camping on some deserted Scandinavian island. In terms of load capacity it’s not likely you’ll take too much luggage with you, the total capacity of the Whisky being 155 kilograms. The day hatch behind the paddler is ideal for everything you need to have within reach while being on the water. Directly in front of you is a small compartment for keeping your camera or other small stuff. Point 65 calls it the The Whisky Hatch.

Name a boat after a liquor?
Shortly before the presentation of the boat Nigel still didn’t have a name for this new model. Finally, in the middle of the night he came up with Whisky. Obviously, the name has nothing to do with with the liquor. After all, to whisk means stir with a light, rapid movement, which definitely describes the paddle techniques while playing with this highly manoeuvrable boat, the Whisky.
I wonder how they’re going to explain the name of that other kayak model, the Tequila…

Help from wind and current
On the way back wind and current brought us back without much effort from our side. With the wind diagonally on the port side it was a matter of now and then putting your paddle in the water for minor corrections. Meanwhile I was completely at ease in the Whisky, no longer intimidated by the waves. The boat was simply lifted over the waves, no matter from which direction they came. I have to say both stability and manoeuvrability make this kayak highly attractive, especially considering we were accompanied by several fast sea kayaks and I didn’t have the feeling I had to work harder to keep up.

Surfing on the waves
In the final kilometre both waves and wind came perfectly from behind, good opportunity do do some surfing! First time for me, but by observing my fellow kayakers I got the Whisky easily to surf. we raced to the shore, passed the jetty assisted by wind and waves, just a few hundred metres and… Splash! 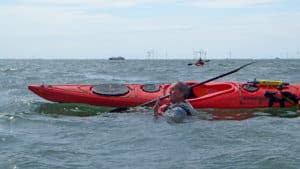 According to designer Nigel Foster it’s your own fault if you tip your kayak. Couldn’t agree more. Picture by Walter Noort

Suddenly I was upside down in my boat. Oh well, good opportunity to test if the boat is easy to exit: pull the spray skirt, slide out of the boat, it’s all effortless. The only damage was to my ego and the capsize gave my kayaking colleagues the opportunity to practise a rescue.  While one was helping me with an X-rescue, another one clicked a line on my kayak to pull both of us away from the fast approaching basalt blocks at the coastline.
Once I was back on the deck I crawled back onto my seat, put the spray skirt back and paddled on. The whole incident was because of my lack of skills; both initial and secondary stability of the Whisky is really good.

Practising skills
Back in the lee of the Schelphoek harbour we did several exercises, including moving your kayak sideways. Bring the boat to speed, stick the paddle close to the cockpit in the water, make a small angle with the blade and the forward motion in converted in a sideways component. The Whisky 16 is well suited for this kind of manoeuvring, as Nigel Foster shows in this video. Indeed, the Whisky did exactly what a wanted! However, I was just able to hear the compliments from the group leader before I was upside down below my kayak again. Another hint this advanced beginner still has to learn a few things. Good execution, poor finish…

In the above mentioned video are also several other examples of the manoeuvrability when a highly experienced kayaker takes a seat in the Whisky. Funny detail: it is the exact same boat I used, not only the same type, no, physically the same boat!

In case of emergency
The last activity of the day was doing several rescue drills with the group. This time I went to rescue somebody after being saved twice myself. I also did a self-rescue with the Whisky: pull yourself on the aft deck, slide forwards and drop back into the seat. Finally your legs need to be pushed inside! The characteristic keyhole access of the Point 65 was just a little too short to get my long legs back in comfortably. While bracing with the paddle I was able to get fully back into the kayak, but a bit more space would have been convenient. Something to keep in mind when having an inner leg length of 90 centimetres. You can also slide in directly from the aft deck, legs first, but especially on rough water this may prove to be somewhat of a challenge. If re-entry poses a  problem, then the slightly larger keyhole of the Whiskey Tourer may be a good alternative.
Back on the beach a small amount of water turned out to have entered the compartments. Not completely unexpected after the countless times the boat was upside-down in the water during the exercises. So, watertight bags are still recommended. 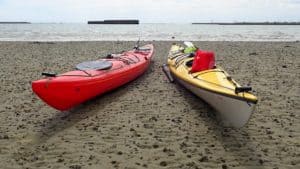 The 65°N Whisky 16 Rocker is simply superb. The manoeuvrability, the unprecedented stability, usage in outdoor conditions, it’s all great. Focus of this particular test was on everyday use, but technically the kayak is also really good. Point 65 has years of experience with polyethylene products and  the Whisky 16 is another example of their knowledge and skills. Indeed, a somewhat shorter, more manoeuvrable kayak makes sense: when do large bodies of water offer calm conditions? Isn’t a dynamic kayak better for a dynamic playfield? Something to ponder about next time I’m in my own kayak again. Also a Point 65, but over five meters long and specialised in going in a straight line. Bit boring actually…